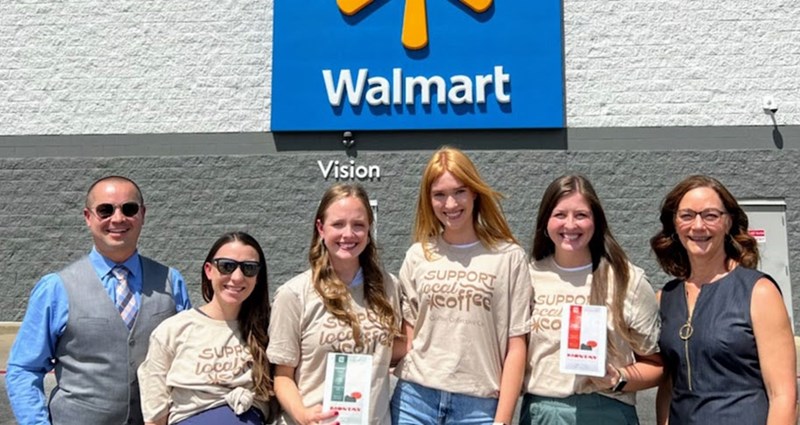 The Business Integrity Leadership Initiative at Sam M. Walton College of Business encourages business students at all levels to integrate ethics and integrity into their daily work and careers. From voicing your opinion when something is seen wrong to understanding how algorithms can affect online results, ethics is an ever-growing focus for the business community.

For the Fall 2021 semester, Cindy Moehring, Founder and Chair of the Business Integrity Leadership Initiative, and Adam Stoverink, Director of MBA Programs at Walton College, challenged the Walton MBA class of 2022 to do “something good” for the Walton MBA ethics tun Project, which challenged teams to incorporate ethical principles into strategic decisions. Student teams rose to the challenge.

Ten student teams were formed. Each team of four to five students then received $1,000 in entry money thanks to a generous donor.

“The whole point of the project is to think of something good and then do it,” Möhring said. “I want students to have the experience of bringing their “Do Good” idea to life themselves, with all the strategic and operational successes and challenges that come with it.

“Once students graduate and enter the business world, they will face ethical dilemmas regardless of their major in school,” Möhring said, line and good for society. Part of the initiative’s mission is to bring the business world and Walton College closer together. This project does so because each of the MBA student teams was mentored by one of the initiative’s external advisory board members.”

The ethics project was integrated into the course on corporate governance and ethics taught by Stoverink.

“Throughout the semester, students learned several important lessons, but two of those lessons stand out,” Stoverink said. “You experience firsthand the positive impact business leaders can and should have on society. And second, the challenge is to make a multitude of difficult decisions, some of which will involve significant moral and ethical considerations.

At the end of the semester, teams presented their projects to a panel of Walton MBA alumni, faculty and corporate leaders in Northwest Arkansas.”

The concept for the winning team, Montay Coffee, was inspired by team member Samuel Skeirik’s personal ties to Haiti and the Haitian coffee industry. Research found that Haitian coffee exports fell by more than $120 million from 1989 to 2021. The team wanted to maximize impact and found they could do so by focusing on trading with Haitian farmers and making them more competitive in the global economy.

To source their beans, the MBA team of Skeirik, Peyton Boxberger, Cornelia Swardh and Anna Snodgrass—along with Skeirik’s wife Bridgett, who served as a consultant—worked with Avanti Coffee Co., a direct trade coffee company in Haiti. Bridgett previously worked as a missionary in Haiti and is an expert on Haitian language and culture. Locally, the Montay Coffee team works with Basecamp Coffee Company in northeast Fayetteville, which uses Montay beans for their guest roast.

Since the company’s inception, Montay Coffee has achieved an 11 to 12 percent return on investment and approximately $10,000 in economic impact. The potential in Haiti for the coffee industry is up to 700 million US dollars due to its unique altitude.

The main goal of the team is to raise awareness about Haitian coffee and encourage others to buy Haitian coffee. When you buy Montay Coffee, you help coffee farmers in Haiti and the Dominican Republic lift themselves out of poverty and become financially independent. Montay runs a lean operation to channel profits to farmers and into Haiti’s economy.

“Walton College gave us the resources to make a start-up successful in the CPG (consumer packaged goods) industry in six months,” said Skeirik.

While the project was a success throughout the year, it continued to have an impact after the project was completed. Three members of the team – Boxberger, Swardh and Snodgrass – have chosen to run the company alongside Bridgett Skeirik. Samuel retired from the company to avoid a conflict of interest with his employer.

“What a proud professor moment! A coffee company that started a project in my class just hit the shelves of 11 Walmart stores in Northwest Arkansas,” Stoverink said.

That let’s talk Produced by the Walton College Business Integrity Leadership Initiative, the program consists of a series of speakers and a book. The Fall 2022 program focuses on speaking up when something seems wrong and how to create a workplace culture that encourages this.

Students, faculty, staff and the public at Walton College may participate in speaker sessions online and/or in person.

Learn more about speaking up when something seems wrong at work by signing up for the Fall Let’s Talk program.

[Julie Storing, associate M.B.A. director, and Mackenzie Brown, a junior majoring in marketing at Walton College, contributed to this article.]

About the University of Arkansas: As the flagship Arkansas institution, the U of A offers internationally competitive education in more than 200 academic programs. Founded in 1871, the U of A contributes more than $2.2 billion to the Arkansas economy by imparting new knowledge and skills, entrepreneurship and workplace development, discovery through research and creative pursuits, while providing training in professional disciplines. The Carnegie Foundation ranks the U of A among the few US colleges and universities with the highest research activity. US News & World Report ranks the U of A among the best public universities in the country. See how the U of A works to create a better world at Arkansas Research News.